Computer scientist is a pioneer for women in technology 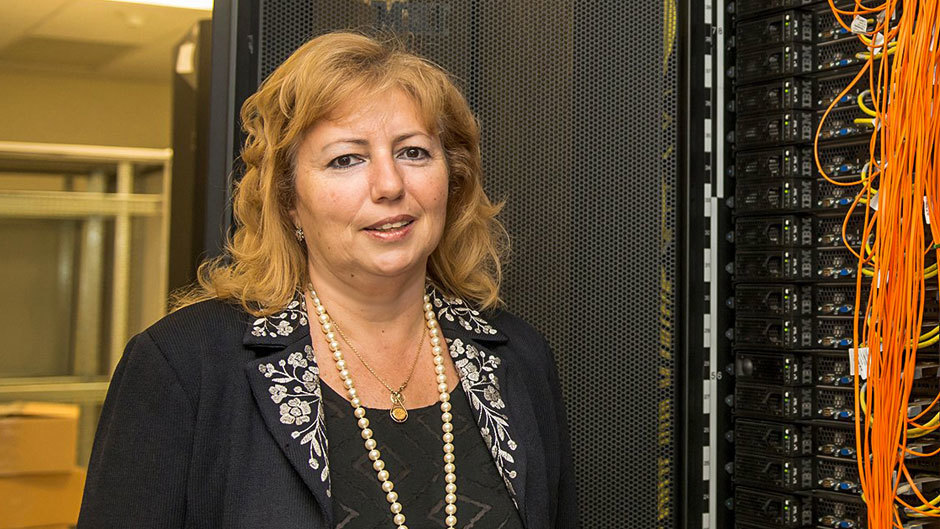 Yelena Yesha has been appointed the first Knight Chair of the Institute for Data Science and Computing (IDSC) at the University of Miami. “She is the perfect fit because she also has the expertise in translating data science into computer applications to solve real-world problems,” said IDSC founding director Nicholas Tsinoremas.

As an expert in blockchain technology, personalized health care, and electronic commerce, Yelena Yesha has always been drawn to challenges.

When the teenage math and physics whiz won second place in Ukraine’s Physics Olympics, she was offered an accelerated path to college—but only if her parents agreed to stay in the oppressive homeland where they were forced out of their jobs. Instead, the ambitious 17-year-old used her meager English skills to help her family flee what is now Ukraine and settle in Canada.

Within three years, Yesha had completed two bachelor’s degrees. Not long after, she gained a reputation for ingenuity and collaboration that landed her in leading roles at some of the nation’s most powerful computing agencies. Often the only woman in the room, and certainly the first to be in charge, she led teams that created one of the federal government’s first electronic commerce systems, repaired the Hubble Space Telescope, and mined health care data to forecast illnesses, improve diagnoses, and forge therapeutic outcomes.

Now the renowned data scientist is eager to take on a new venture as the first John S. and James L. Knight Foundation Chair of Data Science and Artificial Intelligence at the University of Miami’s Institute for Data Science and Computing (IDSC).

“Yelena has a long career in data science—even before you called it that—and has created applications for technology in fields like cybersecurity, remote sensing, and health care,” said IDSC founding director Nicholas Tsinoremas, the University’s vice provost for research, computing, and data. “This is precisely what we want to do in IDSC; thus, she is the perfect fit because she also has the expertise in translating data science into computer applications to solve real-world problems.”

Yesha will direct the artificial intelligence and machine learning program at IDSC, and continue serving as its innovation officer, a role she began in January 2020, when she joined IDSC as a distinguished visiting professor from the University of Maryland, Baltimore County (UMBC). The first woman in UMBC’s computer science department, at age 32, Yesha also became one of its youngest full professors. Yesha said she was lured from her academic home of 30 years by IDSC’s mission to transform the University into a world-class epicenter of data science through research with international scholars and partnerships with innovative companies.

“As Miami becomes a hub for startups, it presents an exciting landscape to train the next generation of our workforce in data science and to help companies take products to the market,” Yesha said.

While at UMBC, Yesha founded the Center for Accelerated Real Time Analytics (CARTA), which pairs academics with government and industry partners to extract useful information from massive and moving real-time data sets. Supported by the National Science Foundation, the University of Miami just became one of CARTA’s five academic sites and is poised to collaborate with  several prominent government and industry leaders—a hallmark of Yesha’s career.

Though she is renowned in the computing field for harnessing data to solve problems in cybersecurity, remote sensing, health care, and e-commerce, Yesha dreamed of being a physician at a young age. But as she learned more about technology, her career goal evolved into one that utilized computers to improve the delivery of health care for everyone.

For the past decade, she has been working with the U.S. Department of Veterans Affairs and using their massive database of clinical information in order to forecast illness. She continues to refine that tool while working on several other health care applications—to improve diagnosis and therapy for dementia patients, develop household smart sensors to transmit a patient’s vital signs to their doctors, and utilize machine learning to diagnose COVID-19 from a patient’s lung CT scans and X-rays.

“I am finally realizing my dreams now, 40 years later,” Yesha said. “My mission is to empower health care providers to take a more patient-centric approach and to take advantage of novel technology at the point of care. We can utilize new technology to improve the prevention, diagnosis, and treatment process.”

Yesha remains humble about her success, which did not come without hardship.

When her family arrived in Canada in 1980, they had few belongings and even less money. She could barely afford bus fare while living in Toronto but remained eager to attend college. Ever resourceful, she earned a scholarship to attend York University and within three years, she earned two bachelor’s degrees in computer science and applied mathematics. During that time, she also met her future husband, Yaacov Yesha, a fellow computer scientist at the University of Toronto.