WiCipedia: What makes a good company for female employees? 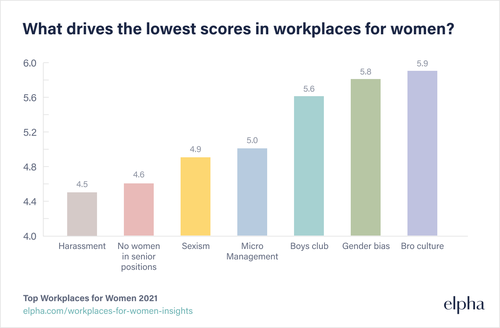 This week in our WiCipedia roundup: How trans people in tech are faring; the best places for women to work; "tech-bro gender-blindness"; and more.

Last week we celebrated Trans Day of Visibility, so there's no better time to examine the role of trans people in tech than now. In many ways, the LGBTQ community has it best in tech, overall an accepting and liberal industry. Yet ABC News explains that there's still a long way to go in making sure that tech companies' trans employees' safety and comfort needs are met, especially with a post-pandemic return to in-person offices. Support groups and more inclusive policies have definitely made an impact on how accepted trans employees feel at work, but they often put all of the pressure specifically on the minority population. Max Masure, a trans nonbinary inclusion strategist, told ABC News: "As trans people, 'we cannot only be the ones educating other people. It gets exhausting.'" The article went on to say that "Trans advocates urge cisgender people to go beyond being allies and become advocates. That could mean asking a company to create gender nonspecific bathrooms or speaking up when a trans person is misgendered or harassed in any way." Much like advocating for racial minorities, if we have privilege, we need to use it for the benefit of others. (See WiCipedia: New inclusivity report for LGBTQ workers and WiCipedia: How to be a better ally.)

Elpha, an online community of 35,000-plus women in tech, recently released its survey of the best places for women in tech to work in 2021. The study, compiled of responses from nearly 2,000 respondents, ranked workplaces anonymously based on many different factors, from the role of allies and communities of fellow female employees to the number of women in leadership roles. Perhaps even more interesting than the actual company rankings though were the reasons that women rated companies poorly. As the report states, "Elpha members who rated their companies 1-5 cited poor direct management, microaggressions, and a 'white-male-driven power structure' as contributing to environments they would not recommend to other women... Women also mentioned mansplaining, harassment, and sexism as top causes for low company scores." The company rankings were divided up into a "big guys" category and startups, and while there are a few recognizable names on there, you may notice the absence of many of the mega companies on the list. We'll let you decide if that's happenstance or not. (See WiCipedia: Pandemic culture shifts rank of best cities for WiT.)