The pandemic has derailed women’s careers and livelihoods. Is America giving up on them? 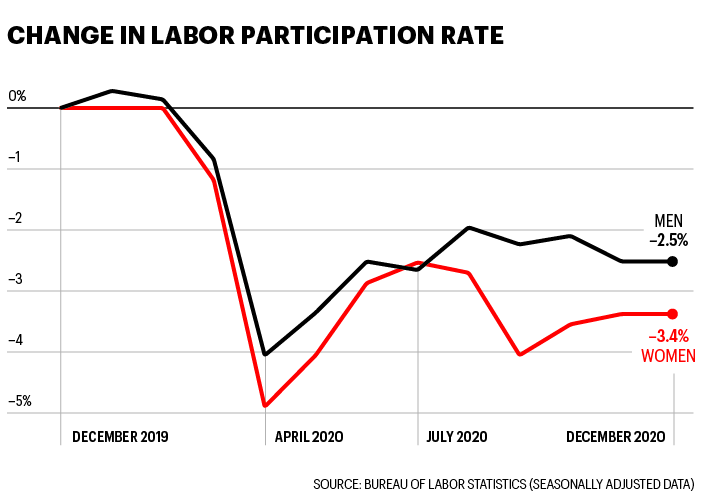 In early 2020, just before the first U.S. patient was diagnosed with COVID-19, women crossed a major employment milestone. The labor market was booming. Health care, education, and other service sectors largely staffed by female workers were racing to hire more people. And for a few shining months in early 2020, government data showed that women outnumbered men in the U.S. paid workforce.

Then “the whole house burned down,” says Michael Madowitz, a labor economist at the Center for American Progress.

It’s been almost a year since COVID-19 closed the schools and day cares working mothers rely on for childcare, and battered many of the service-oriented businesses with majority female workforces. And in that time, the pandemic has set working women back by more than three decades—to levels of labor force participation last seen in 1988. The resulting employment conflagration has spread across race, age, and industry, from low-paid essential workers to “knowledge” employees in remote-friendly corporate roles—although it has, predictably and awfully, done the most damage to the Black and Latina women who were already the most economically vulnerable.

The numbers are shocking: 5.4 million women’s jobs gone since last February—55% of all net U.S. job losses in that time period. Almost 2.1 million women vanished from the paid labor force entirely. By September, three working mothers were unemployed for every father who had lost his job.

Then, early this year came perhaps the bleakest statistic yet: In December, the U.S. economy shed a net 140,000 jobs, the first such downturn since April. Jobs lost by women account for the entirety of that number. While individual men became unemployed during that period, men as a group gained 16,000 jobs for the month. But women as a group—especially women of color—lost 156,000.

The damage to women’s employment is likely to endure beyond the pandemic’s eventual end. Women who have lost jobs or left the labor force are missing out on future retirement and Social Security income as well as current wages and savings. Ultimately, some economists predict, the crisis will increase the gender wage gap by five percentage points. And women who try to return to the labor force in the future will do so with a yawning hole in their résumés.